I hate the constant self promotion. I currently follow 700+ people on twitter I don’t have time or want to read you sales pitch every day for something I am not interested in.  Provide the end reader with value other than sales.  The only exception to this is if it’s a deals type twitter account.

I label these type of people as spammers. They are trying to build up their followers the fast and ineffective way by using the shot gun approach.  This is not a way to build a following at least not a useful one.  Often times these types of accounts are automated.

3. You have very few or very inconsistent tweet patterns.

If you tweet only now and again, no one will follow you. You must not have anything to say. Apparently you signed up for an account to be “cool” or because someone suggested it as a marketing tool.

Every twitter follower I get I check their accounts.  I check to see who they are and why I might be interested in them (product, advice, funny, newsworthy, inspiration for the blog.

The occasional swear word doesn’t offend me but if you have one in the majority of your tweets yeah no you aren’t for me and my guess is you probably aren’t for most people. Put your best foot forward.

6. Your profile features any variation of €œInternet expert€ or “make money online”.

I hate self proclaimed experts because talk is well… CHEAP!  Let your work prove you are an expert.

I hate people that don’t respond to anything. No @usernamehere, no thanks, no retweets, no answer.  No Bueno.  Why are you using twitter if you aren’t joining in on the conversation? 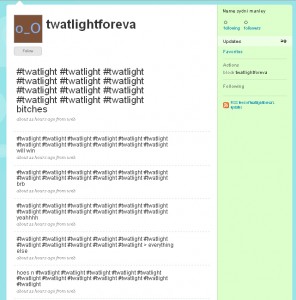 If you are constantly using the same Hashtags over and over. Its a sign to me that you are probably going to violate Rule 1 very soon.

I hate the poor executed or poorly worded direct message after following.  This will get the unfollow ASAP.

In my opinion if you are trying to increase your Twitter influence you should avoid the above issues and focus on providing value to your potential followers.

Promote others 10x’s more than yourself

Provide Value in your Tweets

Engage Others in conversation.

Related: 10 Reasons I Won’t Be Following You on Twitter