Home/Hero, Music/96 Year Old Man Enters a Song Writing Contest with a Tribute to his Wife 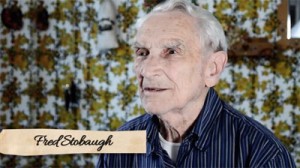 After seeing Miley Cyrus’s appalling performance on the MTV Video Music Awards, I was disgusted with the music business.  However tonight I read and saw a video about Fred Stobaugh and Green Shoe Studio and my faith was quickly restored.

Who is Fred Stobaugh? Well Fred is a 96-year-old man from East Peoria, Ill., who saw an ad in the paper about a song-writing contest sponsored by a local studio, Green Shoe Studio. Fred knew he had to submit his song. Fred’s entry was very unusual, in that this was an online contest, but he entered his submission in an old fashioned way, in the U.S. Mail.  Fred had sent his song in a large manilla envelope and inside was a love story in the form of a simple song. The song was a tribute to his recently deceased wife, Lorraine, with whom he’d spent 75 years. The odd thing is Fred isn’t a musician.

Jacob Colgan, Green Shoe Studio and Fred Stobaugh tell the story of how this song came about.

If you can watch this story without dry eyes then you deserve Miley.