Some of the Cost of 60 Senate Votes

Some of the Cost of 60 Senate Votes 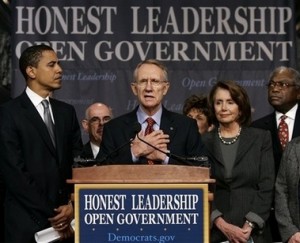 I love the new era of change in our government. I am so happy that we can have open and honest leadership.  This new age of transparency and change from the old methods of running our country are so refreshing.

What a bunch of baloney?

The healthcare debate made its debut in the Senate with a vote to start the debate. Surprisingly they found the 60 votes necessary to make this turd fly. I guess its utterly amazing what you can do when throw money at a problem.  The healthcare won its vote by using the oldest method in the book simple bribery. It appears the Congress can just give out money to buy votes.

Maybe the age of honesty and transparency has arrived but no one is paying it any attention as its business as usual.

Here are just a few of the items of concern.

Goodies for labor tucked away in health bill

One provision epitomizes the nature of this ploy. According to research firms, unions are woefully short of funds to pay their retirees’ anticipated insurance claims. Thus, under the House resolution, union leaders who have mismanaged these plans for their members could receive up to $10 billion in taxpayer-funded bailout money, innocuously referred to as a ‘œreinsurance program.’

After we bail them out for poor management we give them a bigger piece of the pie. As a side note I have seen first hand both unions and the government screwing up retirements. My dad was screwed by both the union and the US Government in his “promised” retirement benefits. Democrat demigod President Bill Clinton didn’t meddle why does the new President need to stick his nose in?

Under the proposed public option, Secretary of Health and Human Services Kathleen Sebelius would wield tremendous discretionary authority to regulate participating health care workers. She and various federal panels, where the unions would have guaranteed seats, would take the lead in recommending health care policy. Thus, labor would have considerable influence over decisions affecting most doctors, nurses and patients.

Have we not seen what unions have done to the car industry in America? We don’t need more unions to make America strong.

Is the AARP getting ‘œkickbacks’ from Obamacare?

AARP, which has given its full-throated support to Democratic health care legislation even though seniors remain largely opposed, received an $18 million grant in the economic stimulus package for a job training program that has not created any jobs, according to the Obama administration’s Recovery.gov website.  American Spectator

So AARP gets grant money and produces no new jobs…

Next AARP helps itself by creating its own government mandated insurance profit machine.

AARP: Helping Seniors Or Helping Itself?

The Congressional Budget Office has previously estimated that the cuts to Medicare Advantage plans proposed in Democrats’ government takeover of health care (H.R. 3200) would cause millions of seniors to lose their current plan and enroll in government-run Medicare.

Because the government-run Medicare benefit is less generous than most private health plans, the independent Medicare Payment Advisory Commission found in June that more than nine in ten seniors not in nursing home settings utilize some form of Medicare supplemental insurance.  While many of these individuals currently rely on Medicare Advantage plans for the extra benefits they provide to seniors, many would be forced to purchase supplemental Medigap policies should their existing Medicare Advantage plans be taken away from them due to Democrats’ government takeover of health care.

A review of its financial statements finds that in 2008, AARP received more than half a billion dollars in revenue from selling products like Medigap supplemental insurance policies-$652.7 million in direct “royalties and fees,” and an increase of more than 31 percent from the $497.6 million in similar revenue AARP generated in 2007.

Royalty revenues now comprise more than half-60.3 percent-of all AARP revenues; a Bloomberg news analysis published in December found that in 1999, royalties comprised only 11 percent of the organization’s total revenues.

The Bloomberg article-which highlighted what one observer called AARP’s “dirty little secret”-profiled seniors who felt betrayed after paying hundreds of dollars above market price for AARP-branded coverage.  One noted that “AARP has great buying power, and people should be able to get the best deal….This is unconscionable, what AARP has allowed to happen.”  Another disillusioned senior wrote to the organization’s leadership asking whether AARP had a “‘˜special relationship’ with

[insurance carriers] by which it receives commissions, incentives, rebates, or dare I say ‘˜kickbacks?'”-and when he arrived at AARP headquarters for a tour, was promptly escorted out of the marble-covered atrium.

While H.R. 3200 would place strict price controls on Medicare Advantage plans-requiring them to pay out 85 percent of premium revenues in medical claims-Medigap policies face a far less strict 65 percent requirement.  In other words, under the Democrat bill, seniors could pay as much as 20 cents more out of every premium dollar to fund “kickbacks” to AARP-sponsored Medigap plans than Medicare Advantage plans.

Contained in the nearly 2,000-page House healthcare bill is a little-noticed provision — worth $300 million to California — that would increase federal Medicare payments to doctors in a wide swath of the state in response to complaints that low reimbursement rates have kept them from taking new patients.

When you are a powerhouse state and have a gaggle of Congressmen just stick out the hand and watch for treats.

On page 432 of the Reid bill, there is a section increasing federal Medicaid subsidies for ‘œcertain states recovering from a major disaster.’

The section spends two pages defining which ‘œstates’ would qualify, saying, among other things, that it would be states that ‘œduring the preceding 7 fiscal years’ have been declared a ‘œmajor disaster area.’

I am told the section applies to exactly one state:  Louisiana, the home of moderate Democrat Mary Landrieu, who has been playing hard to get on the health care bill.

In other words, the bill spends two pages describing would could be written with a single world:  Louisiana.  (This may also help explain why the bill is long.)

Senator Harry Reid, who drafted the bill, cannot pass it without the support of Louisiana’s Mary Landrieu.

I saw last night that Landries had the brass tacts to say that this wasn’t about re-election but about the people especially the uninsured. Yeah right and I’m Brad Pitt.

99% of nearly 100,00 people think that Congress should read the Healthcare bill