Emancipate Yourself from Mental Slavery

Home/Music/Emancipate Yourself from Mental Slavery

Emancipate Yourself from Mental Slavery 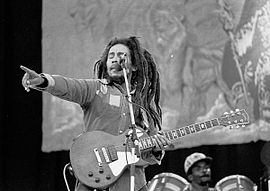 Thirty years ago today, cancer ended the life of Bob Marley.  I can’t say that I am a hugely devoted fan, but some of his songs ring home with me.   In tribute I would like to share my favorite.

The track is “Redemption Song” from Bob Marley and the Wailers’ ninth album, Uprising.

Marley’s compilation album Legend was in heavy rotation when I began to play guitar.  I still often play this song.

Rolling Stone Magazine listed the song at #66 among The 500 Greatest Songs of All Time.

At the time he wrote the song, circa 1979, Bob Marley had been diagnosed with the cancer . According to his wife Rita Marley, “he was already secretly in a lot of pain and dealt with his own mortality, a feature that is clearly apparent in the album, particularly in this song”.

The song urges listeners to “Emancipate yourself from mental slavery,” because “None but ourselves can free our minds”. These lines were taken from a speech given by Marcus Garvey in Nova Scotia during October 1937 and published in his Black Man magazine:

€œWe are going to emancipate ourselves from mental slavery because whilst others might free the body, none but ourselves can free the mind. Mind is your only ruler, sovereign. The man who is not able to develop and use his mind is bound to be the slave of the other man who uses his mind.€ Source: Widipedia