So here we sit at the very end of 2013.  I sit and wonder about the next year but before I do that I reflect upon the last 365 days. I had no idea the hardship I/we would face this year.

Some of the low lights… 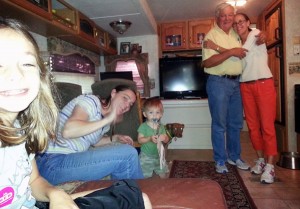 Zach’s stay with us would end abruptly.

My mom being diagnosed with vascular dementia and  forgetting who my dad is.

Packing up my home of nearly 9 years putting it into storage and moving to Texas to live in an RV.

With all of this I could wallow in the sadness or I could expound upon the goodness.

I guess I will start with Zach…  We all knew how this story would end but no one ever wanted to admit it.  I guess it just doesn’t have closure and even though it’s been 9 months since he left it still hurts like a sucker punch to the gut.  Zach spent 7 good years with us as a foster son.  I still miss him terrible even though his disability was sometimes frustrating and his mother a pain in the ass.   I have hundreds of pictures and videos showing that he led a good life at our house. If he hadn’t left we wouldn’t have migrated to Texas which was a path we needed to take.

I don’t think anyone is ready to realize the mortality of their parents. I know I wasn’t.  One day in the spring my sister in law called and had my mother on the line and she had no idea who my dad was and why he was in her house. Nothing prepares you for it.  It quickly became clear that this was too much for my dad to handle on his own and that he needed additional support, physically, mentally and emotionally.   Texas here we come.

Sometimes things seem too good to be true.  My job allowed me to stay employed and to work remotely.  Hanna’s job allowed her to transfer and get a pay raise (in theory). We rented our townhome almost immediately.  The move to Texas seemed the clear and right path but just because that was true, it doesn’t mean it would be easy.  It has been anything but easy bringing troubles and trials too numerous to mention.

I mean who has any clue that 24 hours after the good Mormons from your ward ,who begged you to rent to them, and who wrote you a check as a deposit would call up and freak out.  There aren’t words to adequately describe trying to solve fictional problems on a deserted road in the middle of New Mexico late at night. I mean who doesn’t want to give a huge shout out to people who cancel their deposit check and inform you of it via a text message in the middle of the night.  Terrance and Laura Pabst Mills should be deeply ashamed of their behavior.  I mean I busted my ass to ready the house and move out early so you could have plenty of time to move in and live for more than a week rent free in my house.  That said, I have something very important to get off my chest and then I can go on with life.

I would just like to say thanks to the Mill’s for being a$$h0les.

This is where angels stepped out of the woodwork.  People like my cousin Sara for being awesome and helping us out since we were in Texas.  Most importantly Matt and Laura Cluff family for having faith in their vision and then moving into my house to fill the vacancy, I cannot thank them enough.  Heroes.

Living in Texas has not been without its trials.  No one expects the septic to back up and that you will spend weeks trying to fix it only to have it break again a week later and continue this pattern for nearly two months. Again heroes step up… my dad and my brother Jeff.

Although our situation in Texas isn’t ideal and many times I wonder how much family therapy it will take to overcome this adventure, I don’t think that any of us are regretting our time here.

I love seeing my parents everyday even if sometimes I get sick of them.  I know the kids love seeing them.  I love spending a lot of time with my wife and kids maybe too much time in too close an area. Cabin fever is real people.  I love spending time with my brother’s family.  I love how Brandon loves to hang out and play Madden on the xbox and talk.  I love how Carly always wants a hug.  I am excited seeing Aura be successful as an adult.  I love Damy’s cooking.  I wish I got to spend more time with Jeff but hopefully we can get that figured out. I don’t yet know if this Texas trip is a temporary visit or a permanent lifestyle change but I do know that it’s been a fun adventure that we will talk about forever.