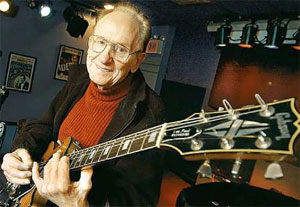 Today is the birthday of one of my heroes, Les Paul.   Les Paul was an American jazz and country guitarist, songwriter and inventor.  He was a pioneer in the development of the sold-body electric guitar (See my Les Paul) which is the backbone to the sound of rock and roll. Paul is also credited with many recording innovations including multi-track recording, overdubbing, delay effects such as tape and phasing.  Paul was also a legendary guitar player and used his innovative talents to create new playing styles.  Les Paul has a huge following of fans (See a few of my favorites). I am not much of a star chaser but I secretly always wanted to meet Les, sadly he passed away in 2009.

Paul was initiated into the Gamma Delta chapter of the Tau Kappa Epsilon fraternity at the University of Miami in 1952.

He has earned the Presidential award from the Tau Kappa Epsilon fraternity.

Les Paul & Mary Ford (His Wife) How High the Moon

Paul received a Grammy Trustees Award for his lifetime achievements in 1983.

In 1988, Paul was inducted into the Rock and Roll Hall of Fame by Jeff Beck, who said, “I’ve copied more licks from Les Paul than I’d like to admit.”

In 1991, the Mix Foundation established an annual award in his name; the Les Paul Award which honors “individuals or institutions that have set the highest standards of excellence in the creative application of audio technology”.

In 2005, he was inducted into the National Inventors Hall of Fame for his development of the solid-body electric guitar.

In 2006, Paul was inducted into the National Association of Broadcasters Hall of Fame. He was named an honorary member of the Audio Engineering Society.

A one-hour biographical documentary film The Wizard of Waukesha was shown at the Los Angeles International Film Exposition (FILMEX) March 21, 1980, and later on PBS television.

A biographical, feature-length documentary titled Chasing Sound: Les Paul at 90 made its world premiere on May 9, 2007, at the Downer Theater in Milwaukee, Wisconsin. Paul appeared at the event and spoke briefly to the enthusiastic crowd. The film is distributed by Koch Entertainment and was broadcast on PBS on July 11, 2007, as part of its American Masters series and was broadcast on October 17, 2008, on BBC Four as part of its Guitar Night. The premiere coincided with the final part of a three-part documentary by the BBC broadcast on BBC ONE The Story of the Guitar.

In June 2008, an exhibit showcasing his legacy and featuring items from his personal collection opened at Discovery World in Milwaukee. The exhibit was facilitated by a group of local musicians under the name Partnership for the Arts and Creative Excellence (PACE). Paul played a concert in Milwaukee to coincide with the opening of the exhibit.

Paul’s hometown of Waukesha is planning a permanent exhibit to be called “The Les Paul experience.”

In July 2005, a 90th-birthday tribute concert was held at Carnegie Hall in New York City. After performances by Steve Miller, Peter Frampton, Jose Feliciano and a number of other contemporary guitarists and vocalists, Paul was presented with a commemorative guitar from the Gibson Guitar Corporation.

In February 2009, only months prior to his death, Les Paul sat down with Scott Vollweiler of Broken Records Magazine, in which would be one of Les Paul’s final interviews. His candid answers were direct and emotional. Broken Records Magazine had planned to run that cover feature the following month but due to delays was held until the summer. 3 days before the release, Les Paul died. The issue would be his final cover feature of his storied career.

In August, 2009, Paul was named one of the ten best electric guitar players of all-time by Time magazine.

On June 9, 2010, which would have been Les Paul’s 95th birthday, a tribute concert featuring Jeff Beck, Imelda May and Brian Setzer among others, was held at the Iridium Jazz Club where Les Paul played nearly every week almost to the end of his life.

Also, in 2011 Google celebrated Les Paul’s birthday with a Google doodle of an interactive guitar.