Apparently the Michael Jordan in Orem, UT was a hoax or a marketing plan to promote the opening night of NBA- D-League team, the Orem Flash. Its just a matter of time until someone admits to it. 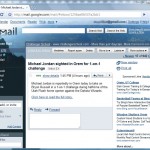 Today at 1:45 pm I received a Daily Herald Important News Alert via email.Â  I opened it to find a story on the Daily Herald’s website reporting the Michael Jordan was seen at Mimi’s Cafe in Orem.Â  The article included a link to a YouTube video that to me appears to be a fake.Â  I linked to it in today’s previous post.

A few items made me suspicious.

With that in mind, whether it was true or not I decided to make my earlier post. If its true… I earn more ad revenue if its false I will earn ad revenue. I looked at it as a win-win. The revenue gathered on this website funds my web hobbies.

The afternoon manager of Mimi’s Cafe told the Daily Herald that a party came into Mimi’s Monday morning. The group told another manager that they were using a Jordan look-alike to film a video in the restaurant.

The Utah Flash says they cannot confirm or deny whether Jordan is actually in town for the challenge. Jordan has not stated whether he will be involved with the challenge or not.

The Daily Herald received an email from the emailÂ devanjhatch@gmail.com which has the name Devan Hatch associated with it informing them about the YouTube video.

The problem I see now is whether or not the Main Stream Media in this case acted responsible.

Did the Daily Herald know it was a hoax?

Or were the complicit in an advertising scheme with Brandt Anderson?

It will be interesting to see if the DH gets called out on this reckless news reporting.Â  Will the Daily Herald be considered a trusted news site or will its readers believe that they have given in to the pressures of viral advertising.

I think that running an unverified story like this based on a YouTube video may be reckless to its duty as a news reporting outlet for Utah County.

While the Daily Herald isn’t the first news organization to be duped, what is the effect on its readers? Will readers continue to trust the content or will the readers become skeptical. Â It will be interesting to see.

I wonder who will be outedÂ publiclyÂ about this hoax? Will it be the Flash?

More from the Daily Herald on the Hoax

All day Monday, no one from Flash management would respond to media inquiries, and no one was made available after the halftime show that featured Russell and a brief appearance by the fake Jordan.

The joke was on the fans who paid for tickets to see Jordan, though many of those in attendance had gotten in free. After a halftime show that included video highlights, dimmed lights and Russell, it was revealed that Jordan was not at the game. The bald look-a-like who showed up on the floor — the same man who was filmed at the restaurant earlier in the day — standing between a phalanx of body guards was a foot too short.