I am a Bitch

I am a Bitch

The word “bitch”, literally meaning a female dog, is a common slang term in the English language, especially used as a denigrating term applied to a person, commonly a woman. It often refers to someone who is belligerent, unreasonable, rudely intrusive or aggressive. Source: Wikipedia 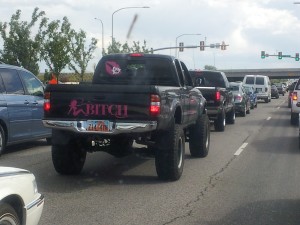 On my drive home from work I saw this woman driving this truck with her “moniker” posted in large pink letters across her tailgate. I couldn’t help but snap a quick photo. A while back, I had a conversation with a woman (identity withheld to protect the ignorant) who told me “No one likes me because I am a bitch.”  she said in a proud manner as if this was a great achievement. I was taken back by this revelation.  Since this confession, the whole thought process behind this has been running around in my head. At what point in our culture does some one want to be self labeled as a belligerent, unreasonable, rudely intrusive or aggressive or any of the other things associated with being labeled a “bitch”?

Who wants to be labeled as something that negative.  What purpose does it serve?  Does it promote anything positive?

From my experience no one likes these kind of self absorbed people.

Do employers want to hire them? I wouldn’t .

Do you want to deal with this type of person at the store? Hell No!

Do people want to be co-workers with them? Probably Not.

Do you want to date/have a relationship with/marry these people? Certainly Not.

So why would you do this? Can anyone explain it to me?