The NFL draft has a way with dealing with possible talented, formerly successful in college, and maybe overrated quarterbacks. It sends them to the dregs of the NFL.  It happened yet again in the 2014 NFL draft. The much talented and often maligned former Texas A&M quarterback Johnny Manziel was drafted by non other than the Cleveland Browns or as I like to call it rock bottom. 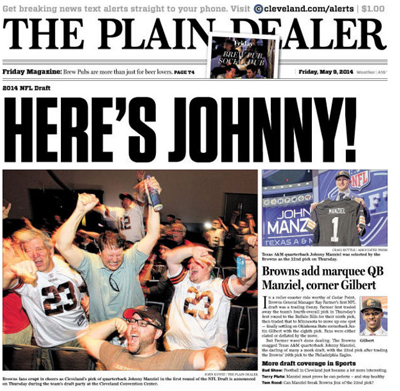 Manziel has been called everything from the a future hall of fame NFL quarterback to a rowdy college kid with no future.  Cleveland is NFL purgatory.  Mixing the two together should be interesting to watch and I hope its not in a train wreck kind of fashion.

Without a doubt Johnny Football has quite a task ahead of him… Overcoming the naysayers who say he is too small and too reckless to have an impact in the NFL.  Ultimately his biggest task is being successful in the NFL despite being in Cleveland.

The old jokes goes something like: Where do successful college quarterbacks go to die?  The Cleveland Browns. What do Tim Couch, Brady Quinn, Colt McCoy, Luke McCown, Charlie Frye,  and Brandon Weeden all have in common?  Their careers died when they were drafted by the Cleveland Browns.  This is a destiny that Manziel gets to face.

The Browns haven’t won more than five games in a season since 2007. The Browns are on their third head coach in three seasons. The Browns overhauled their front office again and have an owner whose company has been under FBI investigation.

There seems to be no joy in Mudville other than the hope that Manziel can overcome the Browns quarterback curse. And that is a big task to ask of anyone including Johnny Football. The Browns have been the butt of all jokes since returning in 1999 after their team was packed up and shipped to Baltimore. I mean there are websites devoted to just mocking the Browns.

This year there is hope.

With all the different leadership changes there are some bright spots like receiver Josh Gordon. They have an excellent young tight end in Jordan Cameron. They have a solid offensive line which should give Manziel plenty of protection. The defense has its own set of up and coming weapons. That includes former Oklahoma State cornerback Justin Gilbert.

For the first time in a long time the Cleveland Browns are relevant in the universe known as the NFL. Lets see if it lasts past October.