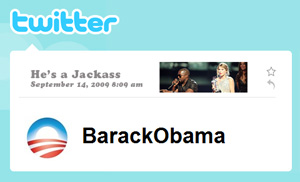 Recently Kanye West made a fool out of himself for someÂ inexplicableÂ reason by ruining a MTV Video Awards Show winners acceptance speech. Â No need to rehash it. Kanya=idiot.

Q: Were your girls as hacked off as mine were that Kanye gave Taylor Swift the Joe Wilson treatment?

Obama: I thought that was really inappropriate. You know it was like she’s getting an award — why are you butting in? I, I hear you — I agree with you.

Q: So does that count as the first question?

Obama: The young lady seems like a perfectly nice person. She’s getting her award. What’s he doing up there? He’s a jackass. (Laughter) No, now — this — all this stuff — I’m assuming all this stuff. Where’s the pool? Come on guys. Cut the president some slack. I got a lot of other stuff on my plate. Yeah. Cause I remember last time it was the fly thing. Now that was the highlight of (trails off)

Q: No that worked out well for you. You were a ninja.

What I find the most interesting thing about this is…

“Cut the President some slack.”

Dude take that one public… you will win some points with Americans. You nearly sounded human… and didn’t sound like Spock.