LinkedIn IPO: Is This The Beginning of Dot.Com Bubble 2.0?

Home/Tech/LinkedIn IPO: Is This The Beginning of Dot.Com Bubble 2.0?

LinkedIn IPO: Is This The Beginning of Dot.Com Bubble 2.0? 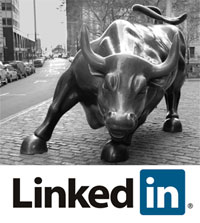 Warning: I am not a professional investor nor do I have holdings in any of these stocks. This post is merely my opinion.

Today the social network LinkedIn went public. It’s time for its investors and founders to cash in.  I get it.

LinkedIn is a network similar to Facebook but is geared more for the professional employee and job seekers.  I have been a member of the site for 7 years (2-24-2004 is my join date). Feel free to add me as a connection. I was turned onto it by a former employer and more on that in a minute.

The IPO has soared in the first four hours of trading doubling the original price. Stock: (LNKD) Good for them.  It’s great to see people build a business employ people and earn wealth.  I am skeptical however!

As a survivor of the 2000 internet bubble, I am wary of internet companies and the stock market. I was laid off 3 times in 6 months. I went from 30 job offers after my first lay off to 0 by my second layoff.  My second lay off was by my friend who turned me on to LinkedIn.  There are no hard feelings.

What is a Bubble?

A bubble is a self-perpetuating rise in the share prices of stocks in a particular sector. A bubble occurs when speculators enter the market due to the fast increase in value and to decide to buy in anticipation of continued rises rather than the principle of shares being undervalued. Typically many companies in the sector become grossly overvalued. When the bubble “bursts,” the stock prices fall dramatically and usually many companies go out of business.  The term is “bubble” is usually used in certainty only after the share prices have crashed.

Why Am I Concerned?

The stock market has been heating up over the last year. Many investors are overly anxious to invest in the market since we have had a long ugly recession. A lot of money was taken out of the market as the market nose dived.  This left a lot of cash on the sidelines and not in the stock market.  The dollar has been losing its value and investors want to cut their losses and increase their profits by investing in the undervalued stocks on the market.  This whole scenario creates more of a buying frenzy especially in the IPO market.

Do you see the beginnings of a bubble?

Because the stock market has been a rough ride for a while, many tech companies have decided to wait to go public because the IPO market seemed dismal at best.

Tech companies especially Internet based come and go like the dandelions in my lawn.  I believe this is the nature of the beast.  Technology changes so quickly that most tech companies last 5-10 years before technology leaves them obsolete or the fickle customer goes elsewhere. Do you remember any of these from 2000?

Pets.com – In June 2008, CNET named Pets.com as one of the greatest dotcom disasters in history. Source: Wikipedia:Pets.com

The next bubble inducing problem: What is an Internet Company Worth?

There are many companies in a similar situation as LinkedIn: meaning needing to or are ready to cash out some of the initial investors. Facebook, Twitter, and Groupon have seen their values surge in the private investing markets.

Internet companies like LinkedIn are tough to value as an investor. They don’t have a lot of physical capital meaning they don’t have as much equipment and product to value.

Facebook is valued due to its insanely large user base. It has a variety of ways to earn cash and large amounts based on its popularity. I think Facebook is large enough that its become a formable company with resources to fight off other companies.

Companies like Groupon are generating large amounts of cash so they can be valued on revenue growth. Is that enough? I am skeptical with Groupon.  I think that someone will create a Groupon Slayer site.  Google?, Facebook? Microsoft?  Groupon is ripe for purchase in my mind.

LinkedIn has three defined revenue streams but they don’t equal that kind of value for stockholders. LinkedIn offers premium accounts for users, advertising and premium services for recruiters.

This makes me scream OVER VALUED!!!

Now what happens as the other Tech stocks who hope to IPO soon?  Will they do as well or better? I suspect that there are several who will blow this IPO away by a mile.  Twitter and Facebook.

Tech Stocks will explode as the feeding frenzy begins.

Thus I believe we are on the verge of a bubble.  Another boom and bust for tech companies.

To get an idea of how big LinkedIn is now, here are some other well-known companies with valuations in the same range: