Embarrassing moments”¦everyone has them now and again. Usually harmless but nonetheless they leave a shiny mark upon the person who had the moment. I recently discovered that I had one about 4 years ago but didn’t discover it until a few days ago.

In the fall of 2002 I was working at Robert Redford’s Sundance Resort as an IT person. Willie Nelson had agreed to come to the resort and perform a concert for Bob’s North Fork Preservation Alliance. They needed a couple of people to help with the set up. It was a chance to be Willie’s roadie for a day. I of course volunteered and was chosen.

I am not a huge country music fan. I knew a small selection of Willie’s catalog of music. I had a CD with Johnny Cash and Willie Nelson singing together on VH1’s StoryTellers. The CD had the song “Me and Paul” written by Willie Nelson. The song quickly became one of my favorites. 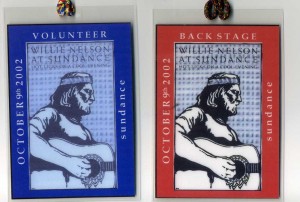 The day came to be roadie for a day. I spent the day with Willie’s crew setting up and stuff. During lunch with these guys we got to talking about the show and set list. I asked the guy who was doing most of the talking about my favorite Willie song. “Is Willie going to play “˜Me and Paul’? I asked. The guy just kind of looked at me strangely and ignored the question. I thought that was weird. I didn’t really think much about it and the day and concert continued on.

Fast forward until last week, while at the library looking through CD’s I found a Waylon Jennings album that featured the song, “Me and Paul”. I looked to see if I could find the guitar tab to the song. I googled and found a website that had an interview with Paul English, Willie’s long time drummer. “Willie and his friend Paul on the road again” I learned that the song “Me and Paul” was about Paul English. Then I started thinking back to my roadie for a day experience”¦ What does Paul look like? Again I googled and wow it’s the guy from that day”¦ Its Paul English. It quickly clicked that the reason he looked at me kind of funny when I asked if they were going to play “Me and Paul” was because he was Paul. He probably thought I was being a smartass not a fan. The embarrassing moment appears years later.

Paul English has been the drummer for Willie Nelson since 1956 when at the request of his brother he took off work to keep a beat for him and his co-host on a radio show in Fort Worth TX that included live music. And that co-host was the not-yet-famous Willie Nelson.

This is Waylon Jennings’ version.

It’s been rough and rocky travelin’,

But I’m finally standing upright on the ground.

And after takin’ several readings,

I thought Nashville was the roughest,

But I know I said the same about them all.

We received our education

In the cities of the nation, me and Paul.

But for reasons that I’d rather not disclose,

But if you’re stayin’ in a motel there and leave,

And at the airport in Milwaukee,

They refused to let us board the plane at all,

They said we looked suspicious,

But I believe they like to pick on me and Paul.

And on a package show in Buffalo

With us and Kitty Wells and Charlie Pride.

The show was long and we was just sittin’ there

And we’d come to play and not just for the ride.

And we drank a lot of whiskey,

So I don’t know if we went on that night at all.

But I don’t think they even missed us

I guess Buffalo ain’t geared for me and Paul.

It’s been rough and rocky traveling

But I’m finally standin’ upright on the ground.

And after takin’ several readings,

I thought Nashville was the roughest,

But I know I said the same about them all.

We received our education

In the cities of the nation, me and Paul.