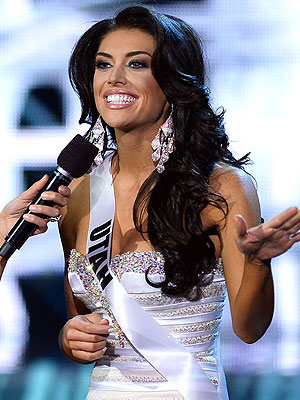 Last night was the Miss USA pageant, I had no idea. My work was all abuzz by the faux pas committed by Miss Utah. Apparently Powell had flubbed an answer during the question and answer portion.

The interwebs is all a flutter with discussion on this.

The error came in response to this:  “A recent report shows that in 40 percent of American families with children, women are the primary earners, yet they continue to earn less than men.  What does this say about society?”

So she missed the question entirely and she did use poor English skills. Is there anyone on the planet who hasn’t said something that upon review sounds stupid?  Now add in all the stress of trying to win the competition, on a show televised worldwide.  Do we really think this is all that big of a deal?

Miss Utah may think differently especially if she goes anywhere near the media/internet but all this was just a simple slip up. She will have her 15 minutes of public embarrassment but in the end there is no such thing as bad publicity. In reality Miss Powell should be proud. She still won third place.

Miss Utah Marissa Powell may have bombed during pageant’s Q&A but in all honesty who cares.

No one was hurt, no one died. No one other than Miss Powell suffered any ill effects.

Can the media just get over it and get back on task about things that really matter like NSA spying, IRS targeting, Bengahzi, the fast and the furious scandal and all other things the media is ignoring?