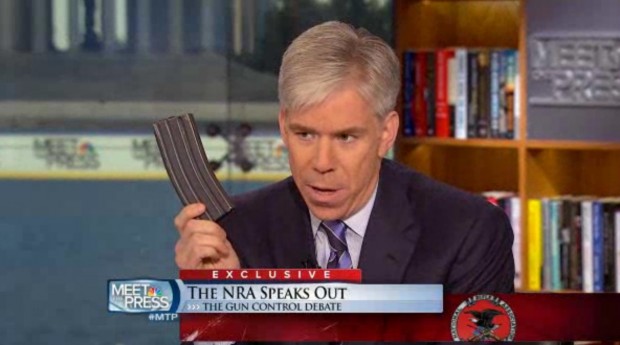 Idiots make the world go round.  David Gregory just made a serious faux paus on National TV. I wonder what will happen to him.

NBC’s David Gregory on Sunday held up a high-capacity magazine for ammunition on national television. This is a magazine that is strictly prohibited in Washington D.C.’s gun laws.

“Here is a magazine for ammunition that carries 30 bullets,” Gregory said on “Meet the Press,” holding it up. “Now isn’t it possible that if we got rid of these, if we replaced them and said, ‘Well, you could only have a magazine that carries five bullets or ten bullets,’ isn’t it just possible that we could reduce the carnage in a situation like Newtown?”

Visit NBCNews.com for breaking news, world news, and news about the economy

I am interested to see what the police do with this. We have seen in the news all kinds of crazy prosecutions in DC of people who have accidentally violated Washington D. C.’s gun laws. Read about Mr. Dwayne Hogue‘s wrong turn that landed him in jail.