I love the outdoors. I love living in Utah where we have millions of acres that can be used for recreation. I spent 4 days last week in one of our National Forests enjoying the wilds with my family that includes a pregnant wife, a young child (age 3) and a foster son with disabilities.Â  I mention this because if this land was designated wilderness we would not have been able to enjoy it.

Last night I read about a new bill making its way through Congress that looks to limit 24 million acres of land in many of my bordering states. These are areas I have access to use but they are under attack. I write this post to stick up for their rights.

I hate it when some idiot from New York who has never been to my state, and is not elected by me, but has the balls to tell me and my state how we will be forced to handle public Â lands in my area. Â This is exactly what is happening to neighboring states with House Bill H. R. 980 also known as the Northern Rockies Ecosystem Protection ACT (NREPA).Â  Rep. Carolyn Maloney (D-NY) is trying to designate 24 million acres of National Forest land in Idaho, Montana, Oregon, Washington and Wyoming as Wilderness and components of the National Wilderness Preservation System.

Why is this bad? The name of the bill sounds sappy nice.Â  Who doesnâ€™t want to preserve the wilds? The problem is Maloney wants to make the land completely unusable. Â Turning it into NWPS land makes the land completely useless. The land is already protected because it is National Forest. It is managed by the US Forest Service whose mission is â€œto provide the greatest amount of good for the greatest amount of people in the long run.â€

Itâ€™s about use people. Â National Forest land is useable to all people. It can be used by hikers, campers, atvs, jeeps, mountain bikers and many other kinds of outdoor recreation.Â  Different businesses can be permitted to use Forest Service Land. It is not an open free for all of raping the forest. Businesses must get permits and permission to use the land. Everything requires an environmental study to see the impact.

There is an economic cost to closing land.Â  Utah schools are heavily funded by logging and mining on Federal lands. When the ability to mine or log is limited the ability to fund Utah government disappears. It leaves a large economic gap.Â  It also limits recreation and tourism dollars by strongly restricting outdoor activity thus lowering sales tax and related business associated with Â recreation.

What good is a wilderness if there are no jobs to fund trips into the vast expanse of our world? Extreme limiting of our natural resources is a recipe for disaster. Just take a look at how poor countries with no natural resources are. It is impossible to be an economic powerhouse without natural resources. Just look at North Korea. I am not endorsing a systematic rape of all timber and minerals of America but we do need to use them and use them prudently. Wilderness designation locks them away forever.

Closing this land by making it â€œwildernessâ€ limits what can be done with the land. It limits economic uses as well as use by the public. It limits access.Â  It limits land managers ability to manage the land to the best of their ability. 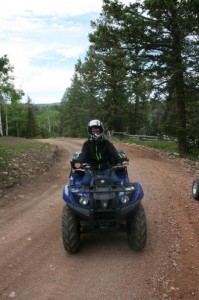 Wilderness designation removes all mechanical travel including biking. The system limits access to the handicap, the elderly and others with mobility problems. It limits the use of chainsaws to clear existing trails; it limits the use of helicopters in the maintenance of land, people rescues and other necessary jobs including the logging of damaged, diseased and dying forests.

Wilderness designation also limits logging which despite what a lot of environmentalists think is often beneficial to the forest. Look at the damage of the bark beetle.Â  Even famous enviromental activist Robert Redford has allowed logging on his Sundance Resort. Redford understood that the health of the forest sometimes neccesitates man’s help when fires and other natural forest elements are limited by man. The forest in its natural state fixes its self but with the absensce of fire the forest needs the help of man. Logging can and must be done responsibly. We are a long way away from the irresponsibility of strip logging.

The problem with designating additional Wilderness Areas is that any type of active management, such as timber thinning or prescribed burning, is restricted on those parts of the forest. However, trained wildlife biologists know that active management is the key to forest diversity.

Many people believe that wilderness protects the forest and its wildlife species from man. Science simply does not corroborate that belief, in fact the studies above and many more prove that active forest management, including prescribed fire, reduces the build-up of fuel levels within the forest and protects against catastrophic wildfires and protects biodiversity. Further, wilderness designations severely limit what can be done to mediate the damages after a catastrophic event such as a wildfire or storm.

There are too many people that think that wilderness designation is the best way to protect the forest from man. It is not. All it does is limit the managementâ€™s ability to manage federal lands and fails to make a better healthier wilderness.

Because of this I am asking everyone to send a message.Â  I have included my letter below.

As a concerned and responsible motorized outdoor recreationist, I am writing to ask that you oppose H.R. 980, the Northern Rockies Ecosystem Protection Act (NREPA), introduced by Rep. Carolyn Maloney (D-NY). Â The bill will designate 24 million acres in Idaho, Montana, Oregon, Washington and Wyoming as Wilderness and components of the national Wilderness Preservation System.

H.R 980 would close all the trails to responsible motorized access in these areas. Our public lands are for the enjoyment of all Americans and not just an elite few. Enthusiasts include families with small children who recreate together, active senior citizens and the handicapped who enjoy the freedom to access the outdoors that off-highway vehicles provide. We cannot afford to close any more trails to responsible motorized recreation without providing an alternative riding opportunities. Therefore I am asking you to please oppose H.R. 980.