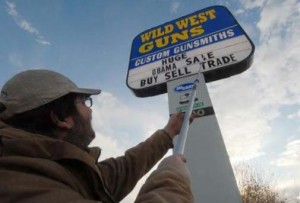 The Obama administration will seek to reinstate the assault weapons ban that expired in 2004 during the Bush administration, Attorney General Eric “Gun Ban” Holder said today.

‘As President Obama indicated during the campaign, there are just a few gun-related changes that we would like to make, and among them would be to reinstitute the ban on the sale of assault weapons,’ Holder told reporters. Source ABC News

It amazes me that people believe Barack Obama. This guy is a smoothing talking SOB. He has a long record of having anti-gun stance. However all during the campaign Obama says I am a strong supporter of the 2nd amendment. Whoops Liar Liar Pants on Fire.

Why have I become such a gun supporter? I believe in the Constitution of the United States. I believe that it was an inspired document. I am tired of my government removing the rights of the people here a little and there a little. At some point everyone who loves this free country must stand up and make a stand. The people must stand up and draw a line in the sand. This is where my line in the sand starts.

England, Austrialia and several other countries have strict gun control and still have higher crime rates than the United States. Austrialia alone spent in excess of $320,000,000 to remove 640,381 personal fire arms and their crime rate rose. The cost per gun is almost $500 per gun. America has an estimated 200,000,000 guns for a cost of $100,000,000,000. I don’t think that will fly after paying trillions in bailout cash.

“Simon Fraser University professor Gary Mauser finds that a year after the British obediently surrendered 160,000 legal handguns, London muggings were up 53 percent, gun murders up 90 percent and robbery up more than 100 percent. By the year following, annual gun crimes overall had risen 39 percent.

This pattern has continued. The rate of violent crime in England and Wales is more than double the United States. It is now more dangerous to walk the streets of London than New York. “ESPN: Why gun bans don’t work â€¦ and what to do

Crime is a part of Human Nature:

Humans can turn anything into a weapon. It took a few men with box cutters to kill close to 3000 people on 9-11. Human caused violence arises from a complex set of social and personal forces. There are people who will prey upon the weak and will take what they want from the easy victims and they will do it using any means available. The way out of being a victim is self-assertion, including defending yourself. The old saying goes that God made men, but Sam Colt made them equal with his pistol. Guns level the playing field. Guns are a tool just like a fire extinguisher.

Criminals will get guns. It’s what they do. Criminals are not detoured, discouraged or stopped by gun laws. If a criminal wants a gun he/she has a method to obtain them. The criminal can have friends, family and or significant other purchase a gun legally. Theft, deception and other means are availabe to a would be criminal as is street transactions. Washington DC is a prime example of Gun Ban not working. During the 30 year ban on guns the district had one of the highest murder rates in the United States.

“Gun control laws are dangerous because they don’t do a very good job of taking guns away from people who shouldn’t have them. They’re more effective at taking guns out of the hands of people who can and should use them, if they chose to, for lawful protection. And gun control laws are most dangerous because they provide such political distraction from much more important issues on reducing crime, particularly reducing the illegitimacy rate. And as long as the president is up there yakking about the Brady bill and assault weapons, that’s all the less time he’s going to be putting into welfare reform and other things to rebuild the family, and that’s the heart of any real solution to crime.” –David Kopel, research director at the Independence Institute and author of ‘The Samurai, the Mountie and the Cowboy: Should America Adopt the Gun Controls of Other Democracies?’

What is the safest country in the world? Its Switzerland. In Switzerland all able-bodied males serve in the militia. And after proper training, they take home modern military weapons ready to put into use at a moment’s notice. Every male over 20 has a full-fledged assault riffle albeit reconfigured as a semi-automatic. Gun politics in Switzerland

The well-armed Swiss militia dissuaded the Nazis from invading in World War II. The peaceful Swiss have more shooting ranges than golf courses and one of the lowest rates of violent crime of any country in the world.

The 2nd amendment is clear that guns are to be owned by the people. I believe there are needed rules to keep guns from criminals and the mentally unstable. Renewing the Brady Bill will not achieve its goal by making America safer.

Video #1 CNN reports why Guns are flying off the shelves at Gun shops Nationwide.

Video #2 A police officer and gun expert show the stupidity of the gun ban by showing you how a gun that looks scary is being banned vs a gun that is a threat.