Obamanomics: A Cell Phone in Every Pocket

Home/Big Government, My Rants, Presidential Race/Obamanomics: A Cell Phone in Every Pocket

Obamanomics: A Cell Phone in Every Pocket

Its good to see the First Lady out and about… sharing the love with the homeless in Washington DC. 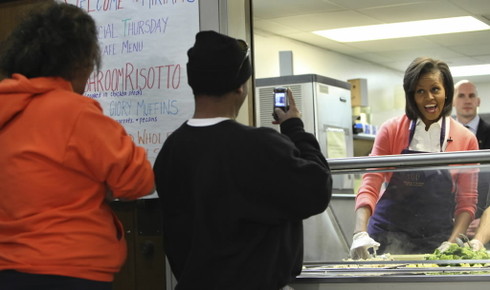 I think everyone should have experience in the service of others. But WTF… Some homeless guy has a cell phone? And its not just an ordinary phone its a blackberry pearl? Wow homlessness has gone technically sheik. Nothing like the homeless suckling at the teet of the Government. Are you homeless and need a mobile phone? Try SafeLink Wireless.

Thats right kids people who are already sucking the life out of the working/middle class by getting free housing, free food and free medical now get a free phone. I love the new socialized America.

While searching for Free Cell Phone Programs I found the Say Anything blog who summed it up nicely.

Personally, I always thought of a cell phone as a luxury. You have it if you can afford it.  It’s something you earn. It’s certainly not something that should be part of a welfare package for “the poor.”

I mean, what motivation do people who are poor have to make themselves better if they can go through life eating subsidized food, living in subsidized housing while talking on their subsidized cell phones?

Update: Its four years later and look who is getting rich off the government free cell phones.

One of America’s fastest-growing wireless carriers is a company you’ve probably never heard of: Tracfone Wireless. It’s the U.S. arm of a telecom empire controlled by the world’s richest man, Carlos Slim, and it’s the biggest player in an increasingly lucrative market: subsidized mobile phones for low-income Americans.