I am Polygamist Cult Leader… NOT

I am Polygamist Cult Leader… NOT

I thought today I would blog about what my friends especially my California friends are all thinking. Eran moved to Utah and is now a member of a polygamist cult.  I mean why else would anyone move to Utah? Right?

I would like to dispel all the rumors. I am not a polygamist nor do I belong to a cult. I know how boring…

The truth is I have but 1 wife and no plans to ever add another. Unless of course I am offered millions of dollars to add another one for a reality TV show on TLC. I can be purchased for my 15 minutes of fame. I mean who wouldn’t sell out for show on TLC.   In all honesty, I can’t handle the wife I have, so I am certain I couldn’t handle more than one. 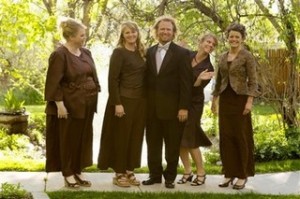 TLC has a new show called Sister Wives.  Its about a man with 4 wives.   The show happens to be about a family in the town I live in, Lehi, UT.  Their house is actually a few short blocks from mine. I find this ironic. I also find it ironic that the Attorney General of Utah says he will not prosecute them.  However I predict after a few more  days of  phone calls from angry constituents AG Mark Shurtleff might change his mind much like the Lehi Police have done.

Producers of Sister Wives apparently feared the Browns could come under legal scrutiny, so they contacted the Utah Attorney General’s Office months before airing the program.

“They called us and said, ‘Hey, are you going to shut us down?'” said Scott Troxel, spokesman for the attorney general.

Troxel said the Utah Attorney General’s Office doesn’t have the resources to go after polygamists unless it suspects crimes such as child abuse or child trafficking.

Apparently after a lot of calls the AG’s office might be getting on board.

HBO and TLC would like everyone to think that Utahans are all polygamists.  Well they aren’t. Polygamy and bigamy are against the law, even in Utah. Bigamy is a third-degree felony in Utah but is rarely investigated.

In 2001, one of Utah’s most high-profile polygamists, Tom Green, was convicted in Provo’s 4th District Court of bigamy and failure to pay child support. He also was later found guilty of child rape.

Prior to his convictions, Green and his family talked openly about their lifestyle on international and national TV programs, including The Jerry Springer Show, Dateline and Judge Judy. Prosecutors said they didn’t start investigating Green until seeing him on TV.