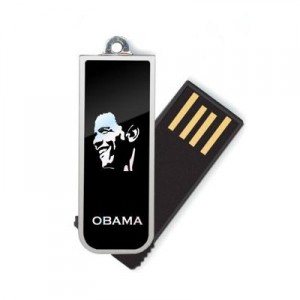 My favorite part of it was the first review of it on Amazon.com

“I purchased the Obama drive with hope and change in mind. I did not want just the usual thumb drive, I wanted something new (even if it did not have much experience or brand name to back it up), something that I could say that I was the first to purchase a flash drive of this caliber and of this style. The day that it arrived in the mail I was eager to open it and see what kind of difference it would make in my computing life. The glossy black finish and the shinny chrome trim made the drive one of the more charismatic items I had ever seen on Amazon. For the first few days, it seemed that things were looking up. The speed was good, the preloaded speeches were excellent, but as the 100 day mark approached, the Obama drive dwindled away. The hope of improvement was gone, the change… well the change was there, but not in the way I had expected. It seemed that the preloaded speeches were contradicting the current speeches and the ones given as a candidate. I wasn’t sure if it was a computer glitch or if the Obama drive was malfunctioning. At this point, my hope still lost, more change was on its way. My system crashed! It crashed worse than any other computer crash since the 1950’s! Now that’s change! I would not recommend this to a friend.  D. Fantasia”

I some times wonder if people realize he is the President of the United States and not Jesus.