â€œThose who cannot remember the past are condemned to repeat it.â€ 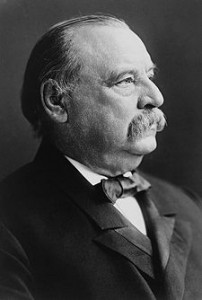 Lately as I read of our nations past I find lessons learned long ago that people have forgotten. Now as a nation we stand upon a precipice that we have stood before and we seem to fail to take head to the lessons learned in times of yore.

Two time President Grover Cleveland spoke of the dangers of providing too much paternal care to Americans via the government.

President Grover Cleveland was notorious for his frugality. During his two terms as President, he was presented often with bills that tried to spend money frivolously. President Cleveland vetoed more legislation than any other President.

Of President Grover Cleveland’s 584 vetoes, that of the “Texas Seed Bill” (February 16, 1887) may be the most famous. Members of Congress wanted to help suffering farmers in the American West, but Cleveland rejected their bill, citing the limited mission of the general government and arguing that private charity and already-existing government programs should furnish the necessary aid.

And yet I feel obliged to withhold my approval of the plan as proposed by this bill, to indulge a benevolent and charitable sentiment through the appropriation of public funds for that purpose.

I can find no warrant for such an appropriation in the Constitution, and I do not believe that the power and duty of the general government ought to be extended to the relief of individual suffering which is in no manner properly related to the public service or benefit. A prevalent tendency to disregard the limited mission of this power and duty should, I think, be steadfastly resisted, to the end that the lesson should be constantly enforced that, though the people support the government, the government should not support the people.

The friendliness and charity of our countrymen can always be relied upon to relieve their fellow citizens in misfortune. This has been repeatedly and quite lately demonstrated. Federal aid in such cases encourages the expectation of paternal care on the part of the government and weakens the sturdiness of our national character, while it prevents the indulgence among our people of that kindly sentiment and conduct which strengthens the bonds of a common brotherhood. Source: mises.org

I believe that President Cleveland is/was right. Our government has become a group of nannies. People have lost the ability to be self reliant and now rely on the government teat. Americans have become too soft. The hardness and strength to handle crises, developed through strong work during difficult times has disappeared. We have become a nation of weak and our only progressing towards more weakness.

I find it quite intriguing that Cleveland mentions that government aid weakens national character and prevents the ability to indulge in the goodness of helping our fellow men. I believe that part of the softening of America is because we have lost touch with our fellow countrymen. We are isolated in much of what we do. There is no interaction with others outside of oneâ€™s small group of friends and family. This produces the effect of intolerance towards other personal situation. We have become intolerant because we no longer see the over persons point of view.

Service of our fellow man is important to build strong bonds of men in a local regional and national stage. Serving those who are in need is a great opportunity to offer needed support but the giver usually finds more treasure than he gave.Â  In my experience the learning opportunities and the fellowship and understanding of others has always trumped any monetary or work given to the needy. Service of our fellow man should be mandatory but not forced upon man by our government. Service should be given by choice not force.