Home/My Rants, Taxes/Raise taxes now — the elders of the economy say so

A friend of mine often emails me articles and his opinions on the craziness of government. Â He humors me and allows me to post it here on my blog. (Past post) Â So here is anotherÂ anonymousÂ guest post from a friend.

Greenspan, no fan of big government and an initial backer of the Bush tax cuts, allows that higher taxes now could lead to slower economic growth, but has said that chipping away at the deficit is more important.

Why not just reduce spending? Wow. I should be an economist.Â Robert Gates seems to get it. Why can’t Congress?

The White House and most Democrats have argued for keeping the tax cuts in place for most households, but letting them expire for those earning more than $250,000, about 2% of the country.

Classic. Now that they’re in charge the tax cuts seem like a brilliant idea so long as we redistribute the wealth from those that earn it to those that don’t. And we can do that, you know. Just write it down and get a bunch of your friends to vote for it. It’s like robbing from the rich to give to the poor, a modern day Robin Hood.

Disclaimer of for the following: I work for a local government agency and have first hand experience in the government operations. This is in no way shape or form meant to beÂ criticismÂ of Â my employer or management. 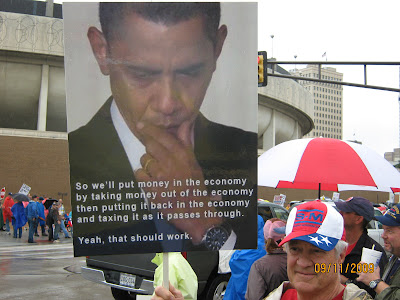 I couldn’t agree more with my guest. Â We are constantly trying to find ways to increase revenue and rarely if ever try to cut expenses. Does any one besides Gates have a clue when it comes to economics and or accounting? Â Debits must equal credits? Â I learned this in high school how hard can it be?

Last week I read a great quote on government. Â Unfortunately I don’t recall where I read that but it stuck in my mind.

“Government will never be efficient because they have the power to tax.”

It stuck in my mind because I am constantly baffled by the inefficiency in government and a complete lack of caring. I have countless experiences of how government waste grows.

My personal thought on it was this….

Government can never be efficient like a free market business because the powers that have the purse strings are elected. Elected officials rarely if ever do theÂ monetarilyÂ sound simply because they need a gimmick to keep their jobs and get re-elected. Â Add in the thought that endless taxation feeds all inefficiencies.

In business if I can’t make money through efficiency my business will fail. Â This isÂ absolutelyÂ not true in government because of the constant ability toÂ acquireÂ more funds through taxation.

I guess I am the optimist on this and believe that government can be run better through a few steps.

This means debits equals credits. Â No if ands or buts taxes must equal spending.

I know that this will be unpopular with those who must get re-elected but its for the greater good. Â There are so many places you can cut the fat its insane. Â  Here is one I tweeted about earlier this week. Â Get angry: your american tax dollars are being used to train foreign IT workers to take your jobs.

There are so many things paid for by the government that are completely unneeded.

Did you know that 9-1-1 provides private business with GIS Data as well as phone data such as address and phone number verification. Â The data is purified through 9-1-1 via usage. Â (We are required to verify every call to an address.) Read More about it here.

The telcom provider and the pubilc safety agencies collaborate to create an E911 Master Street Address Guide (MSAG), a database that cross-references every assigned telephone number, subscriber’s address and the block number ranges for every street, in every jurisdiction served by the telephone company. This allows the phone company’s computer to match the caller’s location with its public safety jurisdiction, and then route the call to the appropriate communications center.

This data is given to phone companies who then sell it back to use for us to use. Â It is sold as a collaboration but we are charged a monthly fee to get this data. Â Its data that we compile. Â WTF?

Why are we charging businesses to do this and or for our data? Â Google map data is provided ultimately by the government but yet Google is making billions off of it. Â Utah Automated Geographic Reference Center (AGRC) is paid by the state of Utah for services but the data is collected by local government agencies. Â AGRC sells our data. Cities and counties Â create GIS data through tax records, 9-1-1 calls etc the data is collected and purified and then we are forced to give it away for free.

My center spends $10000 a year on software so that the media can view whats going on across the valley. The media uses this so that they can send reporters to cover news events. Â Why? Â These media outlets have people who monitor our scanners constantly. Â This software isn’t used by the media much. Instead the media will call the 9-1-1 center and ask if anything is going on wasting time and resources of our 9-1-1 center.

Why not allow 9-1-1 to be funded not by a tax but by selling its data?

These are just 3 simple ideas that I have but will unfortunately these make me unelectable.

Here is an interesting read 105 Ways to cut the budget in 105 Days I know it applies to mostly state government but it still applies.