Todayâ€™s rantâ€¦ The Utah Department of Corrections is planning on issuing a commemorative coin for those who participate in the Ronnie Lee Gardner execution. We donâ€™t have money to fund education in the State of Utah but we have money to fund a commemorative coin for the Ronnie Lee Gardner execution. Apparently since 1985 Utahâ€™s Department of Corrections has been passing out pins and ribbons for â€œspecial assignments.â€

Ok I get it recognizing employees for extra effort… I get it.

ButÂ isn’tÂ dealing with an execution part of the job of being an employee for the Department of Corrections.Â  Itâ€™s like me getting a pin for every time I am awakened during my on call months to reset some idiotâ€™s password. Itâ€™s just strange to me to give an extra reward for doing ones job.

Apparently nobody is wearing the pins so this time they decided to make it a coin.

And then there are the pins that represent participation in the execution of a condemned man.

But no pin will be issued to commemorate Ronnie Lee Gardner’s execution, which is scheduled to occur June 18.

Instead, Corrections spokesman Steve Gehrke said, officials will create a special coin that will be presented to staff members who play any role in carrying out the execution.

“The staff preferred something a little more modern than the ribbons,” Gehrke said. “Since people don’t walk around displaying those anyway, we’re switching to a coin.”Â  Source: Deseret News 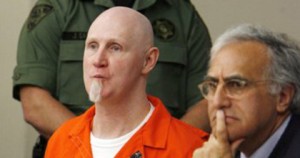 This guy has been sucking up tax payer money since he was a kid. He has been on death row 25 years. He has been a hardcore criminal for 90% of his life and has cost Utah millions of dollars. And now he is costing us more for a commemorative coin? This seems in poor taste to the tax payer and to justice.

If you donâ€™t believe me how worthless this turd is, just check out his record.

The charges stem from an incident that occurred on April 2, 1985. Defendant was being transported from the maximum security unit of the Utah State Prison to the Metropolitan Hall of Justice in Salt Lake City to appear at a hearing on a second degree murder charge. As he entered the basement lobby of the Hall, he was handed a gun by a female accomplice. He fumbled with the unfamiliar weapon; his guards retreated to the parking lot. Gunfire was exchanged, and defendant was shot in the shoulder. He entered an archives room, looking for a way out of the building. There he encountered a court clerk, a prison officer, and three attorneys. Two of the attorneys sought refuge behind the office door. Defendant turned on them, pointed the gun at one and then the other, and fired, killing attorney Michael Burdell. The prison officer, Richard Thomas, was forced to lead defendant out of the archives room to a stairwell leading to the second floor. As defendant crossed the lobby, Nick Kirk, a uniformed bailiff, came down the stairway to investigate the disturbance. Defendant shot and seriously wounded Kirk and then proceeded up the stairs. On the next floor, defendant encountered Wilburn Miller, a vending machine serviceman, and forced him to accompany defendant outside of the building. As defendant stepped outside, Miller broke free and dived through a tellerâ€™s window inside the building. Once outside, defendant, wounded, shackled, and surrounded by police, threw down his gun and surrendered.

Ronnie Lee Gardner is a prime example of the problems with the death penalty and criminal justice system in Utah. Ronnie Lee Gardner has a criminal record that includes several robbery charges. While in prison, he faked an illness to go to the hospital, where he overpowered a guard and escaped. During the resulting crime spree, he killed a bartender, Melvin Otterstrom. On his way into a court hearing for the murder, he was slipped a gun (by a girlfriend, I believe) and started shooing Law Enforcement. He shot and killed attorney Michael Burdell. He then shot Baliff Nick Nirk and seriously wounded him. He was shot in the shoulder and then recaptured quickly. For this, he reached the death sentence.

Of course, this was not the end of Ronnie Lee Gardner. In October 1987, he and another inmate held two female visitors â€œhostageâ€ for about two hours so they could have sex. Since then, Ronnie Lee Gardner has virtually held the State hostage with his â€œdrop my appeal, no donâ€™t!â€ His lawyers say he is just unhappy with his living situation. To that I say: tough luck! You are in prison, not a luxury resort. Deal with it. You do not have a right to more than what you have. Â Source: Bonnieâ€™s Blog of Crime

I find it a sad and disturbing story but itâ€™s time to flush the toilet on this guyâ€¦and not celebrate it with a coin.

Do you think it has anything to do with public backlash?