The Lego Simpsons house will go on sale on Feb. 1 and retail for $199.99. A special 16-character line of mini-figures will be available in May for $3.99 per character.

I have been a huge lego fan since I was a child.  It only got worse after living in Denmark. I think its a cool set but over-priced for my lifestyle. 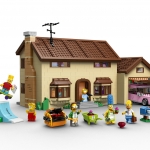 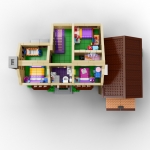 Top View of the First Story of the Simpsons house 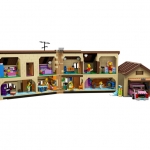 Inside the Simpson’s home 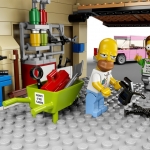 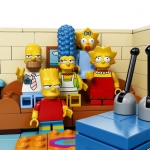 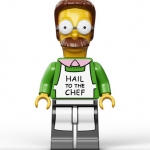 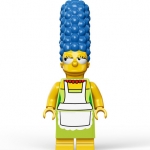 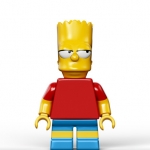 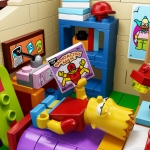 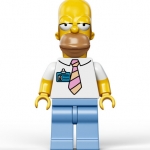 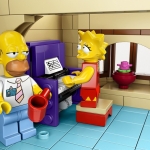 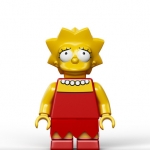 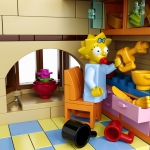 Maggie SImpson in the Kitchen 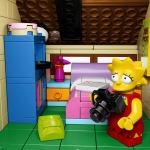 The LEGO Group today announced a new partnership with Twentieth Century Fox Consumer Products to produce a construction set and licensed LEGO® minifigures inspired by the iconic television series, THE SIMPSONS. In addition, FOX is scheduled to air a special LEGO episode of THE SIMPSONS in May 2014 featuring Springfield and its cast of characters in LEGO form.

Scheduled to launch this February in LEGO stores and via the LEGO Shop at Home catalog and website, the construction set will recreate the iconic Simpsons family house in LEGO form. Also included in the LEGO and THE SIMPSONS construction set is the entire family: Homer, Marge, Bart, Lisa and Maggie along with neighbor Ned Flanders. A separate line of 16 LEGO THE SIMPSONS minifigures will launch in all mass toy retailers in May 2014.

“We are thrilled to collaborate with Fox during the 25th anniversary year of the Simpsons,” said Jill Wilfert, vice president licensing & entertainment at The LEGO Group. “We know our fans will love the challenge of building the Simpsons’ family home in great detail and the ability to collect quintessential characters in LEGO minifigure form will let them showcase their love of the show in a whole new way. We are also excited that THE SIMPSONS will be created in LEGO form, truly bringing this partnership to life.”

“We are kicking off the 25th anniversary of THE SIMPSONS in a big way, and we think LEGO-loving fans of the show will be impressed with this collaboration that represents the best of both iconic worlds through the LEGO and THE SIMPSONS construction set, minifigures and LEGO-themed episode,” said Jeffrey Godsick, president of Twentieth Century Fox Consumer Products. “Our partnership with LEGO is the perfect addition to the range of product lines that will be introduced globally in celebration of this great milestone achievement in television history.”

Created by Matt Groening, THE SIMPSONS is the longest-running scripted show in TV history. Since premiering in December 1989, the series has become a cultural phenomenon, recognizable throughout the world. The show was named the “Best Show of the 20th Century” by Time Magazine, has won 28 Emmys and its theatrical short, “The Longest Daycare,” was nominated for a 2012 Oscar.

About THE SIMPSONS
The longest-running scripted show in television history, THE SIMPSONS exploded into a cultural phenomenon in 1990 and has remained one of the most groundbreaking and innovative entertainment franchises, recognizable throughout the world. Currently airing its record-annihilating 25th season and in production on their 26th season, THE SIMPSONS has won 28 Emmy Awards and been nominated for an Academy Award in 2012 for the theatrical short The Longest Daycare.  The Simpsons: Tapped Out is a top grossing mobile App and has ranked number one around the world on the App Store™ charts. The Simpsons Movie had worldwide global acclaim and the revolutionary virtual coaster ride at Universal Studios Florida and Hollywood is a continuous hit, along with the new Springfield experience at Universal Studios Florida.   THE SIMPSONS received a Star on The Hollywood Walk of Fame in 2000 and has been honored with five U.S. postal stamps personally designed by Matt Groening.  Named the “Best Show of the 20th Century” by Time Magazine, in 2013 Entertainment Weekly named THE SIMPSONS the Greatest American Sitcom. THE SIMPSONS airs Sundays, 8:00-8:30 PM ET/PT on FOX.

THE SIMPSONS is a Gracie Films Production in association with 20th Century Fox Television. James L. Brooks, Matt Groening, and Al Jean are the Executive Producers. The Gracie Films Worldwide Brand Division develops and produces the licensed content for the series. Film Roman is the animation house.