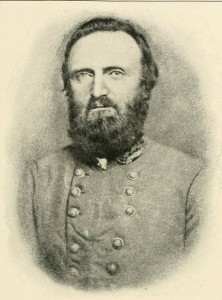 Jackson earned his nickname at the First Battle of Bull Run (First Manassas) on July 21, 1861. As the Confederate lines began to crumble under heavy Union assault, Jackson’s brigade provided crucial reinforcements on Henry House Hill, demonstrating the discipline he instilled in his men.  Brig. Gen. Barnard Elliott Bee, Jr., exhorted his own troops to re-form by shouting, “There is Jackson standing like a stone wall. Let us determine to die here, and we will conquer. Rally behind the Virginians!” (Source:  Freeman, Lee’s Lieutenants, vol. 1, p. 82;)  There is some controversy of whether Bee was exhorting Jackson and his disciplined soldiers or whether it was a derogatory remark at the slow speed or reinforcing Bee’s men.

Battle of Chancellorsville looked to be a slaughter as the Union army out numbered Lee’s Confederate army.  In a break from traditional tactics, Lee split his army in two.  Jackson lead the major force in a large flanking maneuver leaving the Union at a severe disadvantage.  Jackson continued to chase the Union soldiers until night fall.  Jackson and staff were way past the last groups of Confederates. As Jackson and his staff were returning to camp on May 2, they were mistaken for a Union cavalry force by the 18th North Carolina Infantry regiment who shouted, “Halt, who goes there?”, but fired before evaluating the reply. Jackson wasn’t fatally wounded but received three shots to his arm.  The arm severely broken was amputated.  Jackson succumbed to pneumonia 8 days later on May 10, 1863.

It is believed by some that Jackson’s untimely death lead to the downfall of the Confederate Army.  He is no doubt one of the greatest masters of battlefield tactics.

Always mystify, mislead, and surprise the enemy, if possible; and when you strike and overcome him, never let up in the pursuit so long as your men have strength to follow; for an army routed, if hotly pursued, becomes panic-stricken, and can then be destroyed by half their number. The other rule is, never fight against heavy odds, if by any possible maneuvering you can hurl your own force on only a part, and that the weakest part, of your enemy and crush it. Such tactics will win every time, and a small army may thus destroy a large one in detail, and repeated victory will make it invincible.