The Swine Flu Pandemic was caused by the Conservatives

The Swine Flu Pandemic was caused by the Conservatives

I am sad to report that yesterdays post about the media over-hyping Swine Flu was wrong. It was really the Republicans/Neocons/Insert your Favorite Derogative Noun Here and not the media.

When House Appropriations Committee chairman David Obey, the Wisconsin Democrat who has long championed investment in pandemic preparation, included roughly $900 million for that purpose in this year’s emergency stimulus bill, he was ridiculed by conservative operatives and congressional Republicans.

Obey and other advocates for the spending argued, correctly, that a pandemic hitting in the midst of an economic downturn could turn a recession into something far worse — with workers ordered to remain in their homes, workplaces shuttered to avoid the spread of disease, transportation systems grinding to a halt and demand for emergency services and public health interventions skyrocketing. Indeed, they suggested, pandemic preparation was essential to any responsible plan for renewing the U.S. economy. 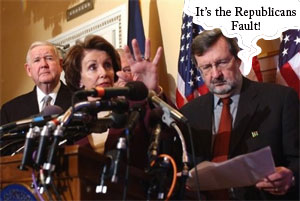 Let’s be honest for once do we really think for one second that $900 million dollars would prevented the 40 people that the Center for Disease Control have confirmed with Swine Flu. Do we honestly think that the masses are any less safe today because we didn’t spend even more money in the Swineous Porkus Bill of 2009? I think not. No amount of money has fixed the ailing banks, suffering economy, stemmed massive job losses and decimated investments of hundreds of millions. Throwing money at a “pandemic preparedness plan” was not going to create jobs. Besides the medical industry is one of the few industries adding jobs.

When you don’t have answers and you don’t have the resources to find the answers you begin the blame game. We have blamed Bush and his cronies for everything under the sun why not Swine Flu? The current batch of leaders in the White House and in the Congress have no clue as to how to solve our current problems. While those currently in charge buy time hoping for a savior on a white horse, our leaders place blame.

And President Obama can once again invoke his time-tested alibi: He inherited the problem. –Michelle Malkin

Barack Obama is simply an inspiring orator and a skillful politician who has no strong convictions about anything, not one damn thing. He is not the savior, messiah or any of these. If the President miraculously rights the ship and gets us sailing again it will be nothing short of a miracle. From my perspective I see nothing indicating that the miracle is on the horizon. Spending money American’s don’t have is not the answer to creating a strong economy over the long term. Americans want the long term. Spending to fix the economy might have worked once or twice in the last 40 years but the gun is at slide lock and we are out of magic bullets.