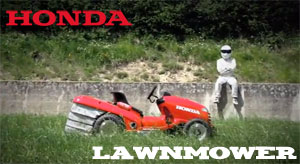 Top Gear is a show that makes me laugh every time I watch it.  Here is a video where the manly men of Top Gear put Honda’s engineering staff to the task of building the worlds fasted lawnmower.

Lawnmower racing began in America in 1963 at the The Twelve Mile 500 in  Twelve Mile, Indiana, organized by the Twelve Mile Lions Club and occurring annually on Independence Day. The tradition began in 1963 as a race for factory-built mowers with their mowing decks removed but in 1996 split into a two-race event with one for four-cycle Briggs lawn mowers and another for modified mowers.

Unfortunately Honda’s entry into lawnmower racing has been disqualified for being too modified.

Read more about the build at TopGear or BBC: Honda races to build speedy lawnmower for Top Gear team. Or Read about Satan’s lawnmower that is for sale.