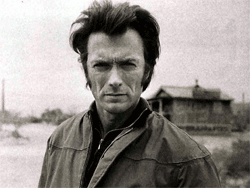 Yesterday I flipped on the tube and watched part of “Gran Torino”. I love that movie. Its hard to believe that next month Clint Eastwood turns 80. I got to thinking about all the great movies that Clint Eastwood has done.

Clint Eastwood is always viewed as the violent vigilante cop. I think that isn’t true but he seems to like to be a character that has flaws and demons but rises to the occasion.

He is probably one of my favorite actors. I decided to feature some of my favorite Clint Eastwood Movies and quotes. If you are sensitive to language most of these clips have profanity.

This is my favorite Eastwood film. It won a Best Picture Oscar.

“It’s a hell of a thing, killin’ a man. You take away everything he’s got, and all he’s ever gonna have.”

This movie is another classic Eastwood film. It’s a classic tale of a man with a life time of demons and flaws. A man who is a great American becomes the hero.  Its a movie about standing up for whats right.

“Ever notice how you come across somebody once in a while you shouldn’t have messed with? That’s me.”

This is the last movie of a trilogy about “the man with no name”. It is considered one of the all time greatest western movies. All three are great movies about three gunslingers fighting for buried Confederate gold. The cinematography is awesome. This movie also has a classic music hook. I saw this once on my mission at a 2 am movie festival.

“You see, in this world there’s two kinds of people, my friend: Those with loaded guns, and those who dig. You dig.”

This is the original action movie. My wife doesn’t understand it but guys love it.

“I know what you’re thinking. “Did he fire six shots or only five?” Well, to tell you the truth, in all this excitement I kind of lost track myself. But being as this is a .44 Magnum, the most powerful handgun in the world, and would blow your head clean off, you’ve got to ask yourself one question: Do I feel lucky? Well, do ya, punk? ”  Watch it Here

Josey Wales, a peaceful Missouri farmer, who is driven to revenge by the brutal rape and murder of his wife and family by a band of pro-Union soldiers.  Along the journey he gathers different misfits who join his journey. It reminds me of the Wizard of Oz in a way. Anyway if you haven’t seen it, it’s a great movie.

“Now remember, things look bad and it looks like you’re not gonna make it, then you gotta get mean. I mean plumb, mad-dog mean. ‘Cause if you lose your head and you give up then you neither live nor win. That’s just the way it is.”

This is the 4th installment in the Dirty Harry series and it coined a hit phrase of the 80’s. It is also the darkest of the series.

This is a semi chick flick by Eastwood who plays Philo, a truck driver who happens to be a great fighter. This is a sappy love story that also includes a lovable orangutan known for punching people on command.  There are lots of great actions scenes and follows the similar lines of  “Smokie and the Bandit“.

“I’m not afraid of any man, but when it comes to sharing my feelings with a woman, my stomach turns to royal gelatin.”

This is an 80’s military movie that has an old soldier Gunny Sargant Highway educated at Heartbreak Ridge  in Korea and Vietnam put in charge of training new troops ill prepared for battle.  This movie is full of classic one liners.

“I’m not doing this because I want to take long showers with you assholes and I don’t want to get my head shot off in some far away land because you don’t habla, comprende?”

Another great western by Eastwood. He plays a preacher who comes to town to protect the people from an business man who wants their land for cheap. You don’t know if he is a ghost or a real preacher.

“Well, if you’re waitin’ for a woman to make up her mind, you may have a a long wait.”

This is another award winning movie by Clint Eastwood. It won 4 Oscars. Its about training a woman prize fighter.  The great quote from this movie was actually not by Eastwood’s character but by Morgan Freeman’s

To make a fighter you gotta strip them down to bare wood: you can’t just tell ’em to forget everything you know if you gotta make ’em forget even their bones… make ’em so tired they only listen to you, only hear your voice, only do what you say and nothing else… show ’em how to keep their balance and take it away from the other guy… how to generate momentum off their right toe and how to flex your knees when you fire a jab… how to fight backin’ up so that the other guy doesn’t want to come after you. Then you gotta show ’em all over again. Over and over and over… till they think they’re born that way.