The Stig is a character in the British motoring television show Top Gear. The character plays on the anonymity of racing drivers’ full-face helmets, with the running joke that nobody knows who, or indeed what, is inside the character’s racing suit. The character was the creation of presenter Jeremy Clarkson and the show’s producer Andy Wilman. – Wikipedia.

Each episode, one of the presenters, usually Jeremy Clarkson, gives a short quote about the Stig, invariably starting with “Some say”, then two of the quotes below. He finishes by saying “All we know is, he’s called The Stig.”

he once gave the Pope a noogie; and whenever someone shouts “The Jolly Roger!” while making whoopie, he gets four quid.

He is a die hard fan of Michael Jackson, that’s why he changed from a black racing suit to a white one.

He once made a Ferrari Enzo with 3 toothpicks, a goat & Richard Hammond’s DNA

He was once roundhouse kicked by Chuck Norris but he stood there with his arms folded.

His favorite color is blur

If he went surfing he would attach a motor to the board and he loves the duck flavor ice cream.

He knows two facts about duck & they are both wrong.

His blood is 2-stroke and his favourite tipple is malibu and baby lotion.

His genitals fit perfectly into a Koenigsegg’s exhaust pipe.

He is shy of Justin Beiber & His first car was a Peel P50.

He drinks a lot of petrol.

He was born in space. 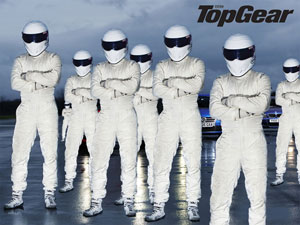 He roams around the woods at night foraging for wolves.

His sweat can be used to clean precious metals.

His skin has the texture of dolphins.

If you tune your radio to 88.4 FM you can actually hear his thoughts.

He does not see like humans do, instead he sees numbers in green scrolling down (a reference to the The Matrix).

He is scared of bells.

He once punched a horse to the ground.

His politics are terrifying.

He lives in a tree.

He was raised by wolves.

He appears on high-value stamps in Sweden.

His favourite philosopher is Immanuel Kant.

He has no understanding of clouds.

He is confused by stairs.

All his legs are hydraulic.

He appears on Japanese banknotes.

There’s an airport in Russia named after him.

He is wanted by the CIA.

His breath smells of magnesium.

He can catch fish with his tongue.

His tears are adhesive.

If set alight, he’d burn for a thousand days.

He is terrified of ducks.

His voice can only be heard by cats.

He has two sets of knees.

He can swim seven lengths underwater.

He has webbed buttocks.

He is more machine than man. (a reference to Darth Vader).

His heart is in upside down.

His teeth glow in the dark.

His favorite food is raw meat.

He has no age.

He urinates 98 RON petrol (On The Top Gear Website Profiles)

He can smell corners (On The Top Gear Website Profiles)

He blinks this way. (Clarkson closing his thumb and forefinger on both held-up hands — a reference to Men in Black)

He has acid for blood. (a reference to the Alien).

He has a bionic arm.

He has a tattoo of Buzz Aldrin on his thigh.

He is stumped by clouds.

He has no fear.

His ears aren’t exactly where you would expect them to be.

He has a digital face.

If he felt like it, he could fire Alan Sugar. (a reference to the UK version of The Apprentice, featuring the aforementioned head honcho of Amstrad in the Donald Trump role)

He has named every single blade of grass surrounding the Top Gear test track.

His genitals are on upside down.

If he could be bothered, he could crack the Da Vinci code in 43 seconds.

His ears have a paisley lining.

He is banned from the Chelsea Flower Show. 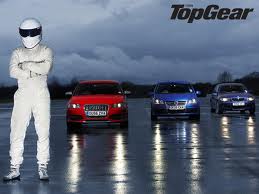 The outline of his left nipple is exactly the same shape as the Nürburgring.

His laugh sounds like a broken accordion, others say he can fly using his ears.

He has a USB port in his left nostril, and that his actions are carried out telepathicaly, by God.

He has no face and that his hands areÂ super-conductive.

He’s married to a nuclear warhead, and that carbon fibre is his middle name.

He hosts a Danish talk show, and that he has an irrational fear of lettuce.

He gives off carbon monoxide every minute, and that his diet consists of a Fiat 500R with HP sauce.

He shaves with a chainsaw, and that he can climb the Eiffel Tower using just his lips.

He has go faster stripes on his back, and that he’s the love child of god and an Aston Martin v12.

He is in fact the very Dingo that ate your baby.

He has ECU for a brain, and if you give him a Vauxhall Nova and tell him to drive around NÃ¼rburgring Nordschleife, he will pull a 7 minute lap.

He is really Stig Blomqvist, others say he’s photosynthetic.

That his movement makes the world spin, and if you’d put him in the dark room, he would glow.

He reacts with water, and he knows all the internet.

He drove out of his mother’s womb, andÂ rumorÂ has it that all ghosts are haunted by him.

He has a lead foot…. but he can never look at the back of anyone’s head… because everyone is looking at back of his… come to think of it does he have a head?

He’s got a tail stuffed down one leg of his trousers…and that he is the real inspiration behind Speed Racer.

He was born in an Ferrari.

He was wrtten in Java and once in a car, he turns on his hacks.

He has no heart, just a 2 cylinder engine, others say his I.Q. is measured in Horsepower.

He can dislocate his tongue, and that he is the world champion of staring contests.

He feeds exclusively, on vegetable oil… And that if he were the queen of England he would’ve by now, dissolved the Parliament.

That if you were to decapitate his genitals, they would simply grow back…and that he still thinks Americans are edible.

He showers in ATF and that he sleeps in the back of a mobsters 300c, for the convasation.

That his eyes can shoot laser beams and that after years of trying, he finally caught that damn roadrunner.

He was trained by Finns, and spends his time chasing squirrels.

He was born underwater, and that he could circumnavigate around the world in 80 minutes.

He was a part of an early Russian space program that went badly wrong in flight, and that because of it he became the first man to successfully land on Poland.

He’s got oil between his toes, and their made up of metal.

He is the center of gravity of earth and once he dies earth willÂ under-steerÂ out of the solar orbit.