The Utah Legislature Supports the 10th Amendment but not the 4th

The Utah Legislature Supports the 10th Amendment but not the 4th

Apparently the Utah legislature is no fan of The Constitution.  Last year the Utah legislature passed a bill that would allow prosecutors the power to get your contact information from your ISP or cell phone companies without the oversight of a judge when the prosecutors suspect a child sex crime. Don’t get me wrong I believe child sex offenders deserve harsh penalties however I believe also that they deserve the due process of law.

This year legislature passed House Bill 150 Administrative Subpoena Amendments that broadens the powers of prosecutors to bypass the Constitution once again but this time it includes more crimes which include suspected felonies, as well as cyber-stalking and cyber-harassment (misdemeanors).

This is a violation of the 4th Amendment Right of illegal searches and seizures specified in the due process clause. Where the hell is the media on this? Where is the ACLU? Where is Glenn Beck?

The Fourth Amendment specifies that any warrant must be judicially sanctioned for a search or an arrest, in order for such a warrant to be considered reasonable. Warrants must be supported by probable cause and be limited in scope according to specific information supplied by a person (usually a law enforcement officer) who has sworn by it and is therefore accountable to the issuing court. Source: Wikipedia

According to the Salt Lake Tribune: “Since the bill took effect, more than 200 such subpoenas have been issued, or slightly more than one a day.”  Courtesy of  Saintless

Saintless goes on to say:

Odd don’t you think? The most conservative state in America doesn’t support The Constitution.  This is the same state legislature that passed laws challenging the authority of the Federal Government with the Firearms Freedom Act.

So the 10th Amendment is more important than the 4th Amendment?  That is the message the Utah Legislature is peddling with their actions.

This whole rant was stirred by a post, I read today on Pete Ashdown’s blog: Go Pete Go!!!

Now the funny part about this. Brad Daw is a hypocrite of the finest order.

House Bill 150’s sponsor is Brad Daw R-Orem. I didn’t know anything about Brad Daw so I googled his name. I found out that he is up for re-election in 2010. I went to his campaign website. his website is full of Founding Fathers quotes and testimony about Daw’s devotion to upholding The Constitution. Here is the text of his site. (Hey Brad… if you are computer genius maybe you could use W3 compliant code because your site coding sucks worse than your design.)

He also has a link to a video in which he appears for The Patrick Henry Caucus.

Where the hell does he get off violating the 4th Amendment with his legislation and then preaching about his support of The Constitution? 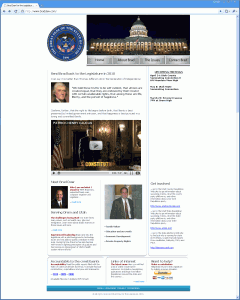