Last year I blogged about a local Utah triathlete  James Lawrence who was raising money to build damns in drought plagued Africa by racing in triathlons when mid way through his bike was destroyed by Delta Airlines.

Well James is back.

James plans to set a Guinness Book of World Records mark by racing in 30 Ironman Triathlons in 10 countries in 12 months. While trying to break the world record, James will be earning money for charity.  Quiet Way is a local Utah charity trying to raise money for Kenya.

“Give a Dam”  Quiet Way is working with the Kenyan government and Kenyan engineers to build approximately 1,000 water retention systems throughout Northern Kenya to relieve drought.  Each dam approximately between $10,000 and $15,000 to complete ($1,000,000-$1,500,000 total). The first two dams have been built, and began filling with water in November, 2009.  Studies are being done to insure that the design is self-sustaining, and effective.

“Famine relief” Quiet Way provides food staples to communities in Northern Kenya, currently suffering from drought and famine, until the “Give a Dam” water retention systems are in place to provide long-term relief.  Costs of feeding these communities is about $5 per person for a week.  (There are currently 3 million Kenyans starving due to drought.) Website: www.triandgiveadam.com

To be able to reach his goal James has had to get sponsorship.  His biggest sponsor has asked for 15000 Likes on his Facebook page to get James sponsored. 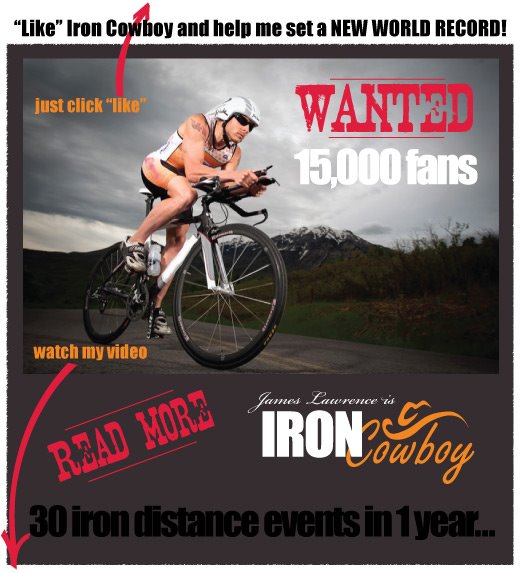