What to give to the United Way?

What to give to the United Way?

Its some times hard to decide what to give to charity.Â 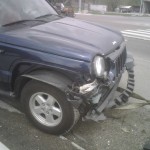 The asshat that was driving the United Way van in Lehi on Monday thought that the bumper would be a nice donation and took it as he blasted through a red light.

Â My favorite part of the ordeal was when the Lehi Police officer told me that I was just trying to incite trouble by mentioning to my wife that we needed to remove all our valuables from the car.

The last wreck the towing company/storage lot stole everything not bolted down and some things that were. I replied that the last time we were ripped off. And the officers responseâ€¦.

Â So those not in the knowâ€¦ Lehi, UT doesnâ€™t have any theft/vehicle burglaries.Â

And the last time my car was in the crime metropolis of Lindon, Utah.Â