Home/Posts/Books, History, Motivational/Robert A. Heinlein Is Needed More Today Than Ever.
Previous Next

The author Robert A. Heinlein has been dead for nearly 30 years but his words are more needed today than ever. To be upfront and honest I hadn’t read much Heinlein until recently. I had read his most well known book Starship Troopers in college as well as portions of A Stranger in a Strange Land.  Recently I saw a post on Facebook using one of his quotes: 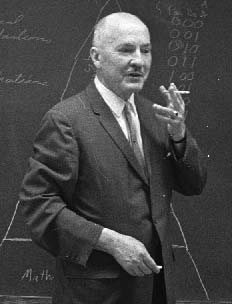 [T]here seems to have been an actual decline in rational thinking. The United States had become a place where entertainers and professional athletes were mistaken for people of importance. They were idolized and treated as leaders; their opinions were sought on everything and they took themselves just as seriously—after all, if an athlete is paid a million or more a year, he knows he is important … so his opinions of foreign affairs and domestic policies must be important, too, even though he proves himself to be ignorant and subliterate every time he opens his mouth.

This quote is more relevant today than ever. Now every wealthy entertainer, athlete or social media star has an opinion and are experts in fields they have no business speaking about.  Millions of sheep seem to base their beliefs on what I call charlatans and fakers.  All you must do is listen to all the noise about the current President.

After reading the Facebook quote I did a quick search to see why Heinlein’s name seemed familiar. I was quickly reunited with several quotes that have impacted me and my life.

One of my favorites is indirectly on gun control.

“An armed society is a polite society.”

“The police of a state should never be stronger or better armed than the citizenry. An armed citizenry, willing to fight, is the foundation of civil freedom.”

“Place your clothes and weapons where you can find them in the dark.”

Or the role of individuals in our country.

“Love your country, but never trust its government.”

Anyway I love to create lists and write this blog so that my children and future generations know a little about me.  Please enjoy this other quotes from Robert A. Heinlein.

“The whole principle is wrong. It’s like demanding that grown men live on skim milk because the baby can’t eat steak.”

“Sin lies only in hurting other people unnecessarily. All other “sins” are invented nonsense. (Hurting yourself is not a sin – just stupid.)”

“When any government, or any church for that matter, undertakes to say to its subjects, “This you may not read, this you may not see, this you are forbidden to know,” the end result is tyranny and oppression, no matter how holy the motives. Mighty little force is needed to control a man whose mind has been hoodwinked; contrariwise, no amount of force can control a free man, a man whose mind is free. No, not the rack, not fission bombs, not anything — you can’t conquer a free man; the most you can do is kill him.”

“Limiting the freedom of news ‘just a little bit’ is in the same category within the classic example ‘a little bit pregnant.’”

“Political tags — such as royalist, communist, democrat, populist, fascist, liberal, conservative, and so forth — are never basic criteria. The human race divides politically into those who want people to be controlled and those who have no such desire.”

“I am free, no matter what rules surround me. If I find them tolerable, I tolerate them; if I find them too obnoxious, I break them. I am free because I know that I alone am morally responsible for everything I do.”

“The human race divides itself politically into those who want to be controlled, and those who have no such desire.”

“Secrecy is the beginning of tyranny.”

“In a society in which it is a moral offense to be different from your neighbor your only escape is to never let them find out.”

“There is no worse tyranny than to force a man to pay for what he does not want merely because you think it would be good for him.”

“Violence, naked force, has settled more issues in history than has any other factor, and the contrary opinion is wishful thinking at its worst. Nations and peoples who forget this basic truth have always paid for it with their lives and freedoms.”

“Being intelligent is not a felony. But most societies evaluate it as at least a misdemeanor.”

“You can have peace. Or you can have freedom. Don’t ever count on having both at once.”

“The two highest achievements of the human mind are the twin concepts of “loyalty” and “duty”. Whenever these twin concepts fall into disrepute, get out of there fast! You may possibly save yourself, but it is too late to save that society. It is doomed.”

“Of all the so-called natural human rights that have ever been invented, liberty is least likely to be cheap and is never free of cost.”