In this new economy that we find ourselves in I find it tragic that government is so desperate for the economy to bounce back that they will try anything… including doubling your income tax. Governor Pat Quinn of Illinois admitted on Friday that he actively pursuing raising the Illinois state income tax to 4.5 % from its current level of 3%.

“There will be some that will have a higher tax burden,” Quinn told reporters today during an impromptu news conference at the James R. Thompson Center, adding it would be based on the ability to pay. Quinn said an increase would be part of a “fundamental reform” of the income tax system that would provide tax relief for many Illinoisans.  The Chicago Tribune 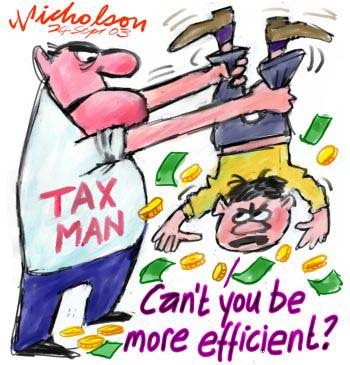 In all honesty I could give a rats pajama about Illinois.  If their economy is less competitive then it means mine has a better shot but I love this quote.

“An increase would be part of a fundamental reform that would provide tax relief for many Illinoisans.”

How the hell does raising the income tax on those who work provide tax relief for tax payers? Oh yeah it doesn’t add up.  It doesn’t add up in old math, new math or even fuzzy math.

Why don’t Government leaders realize that maybe the tax and spend government isn’t the right economic engine to bounce the economy back. Maybe it’s time for drastically smaller government. A radical new approach could be less government in our lives. Fewer laws being past, fewer programs for lazy Americans. We need to remove the laws that have made our nations uncompetitive. We need to clear out the lawyers who are sue happy and create costs and hurdles for businesses. Tort reform is a part of getting back our competitive spirit.

I believe that if we don’t find strong leaders to lead us out of the mess we are in that we are in the sunset of America.  Other countries that have a workforce that understands the entrepreneurial spirit will crush us slowly. We are stuck in a quagmire of problems that the new American socialists are blind to.

Business is what has made America great, not the redistribution of wealth from the rich to the poor and lazy. The American dream of working hard and finding success is not gained by giving to those who aren’t motivated enough to seek a better life. Raising taxes and hurdles for business by government is not the answer.

Everyday our government is hell bent on ruining business through regulation. Laws like the amount of lead in anything sold to kids ages 0-12 may not contain lead. Every item must be rigorously tested for lead. It is a law that meant well but is killing the atv and motorcycle  business.  No longer are they allowed to sell their products to kids because there is too much lead in the engines and brakes.  Lord knows that the kids lick the engine all day long. I know that this is a silly example but it is an example none the less of government getting involved and trying to do good but killing business through a lack of understanding how business works.